YAML provides a powerful and precise configuration for a data science pipeline to run to a production standard, and as such it needs care to specify it correctly. While it is relatively intuitive to see what is going on at a high level, there is a lot going on in the details. The combination of YAML syntax, Gradient actions, implicit information, and the conceptual variety of steps being performed for data science (data preparation, model training, model deployment, etc.), means that it can be tricky to get everything right at first.

We therefore collect here some examples likely to come up in practice when implementing data science Workflows.

YAML requires precise indentation, and tabs are not allowed. The Gradient Notebook allows easy creation and editing of YAML files, with aids such as visual prompts for indentation, and syntax highlighting. 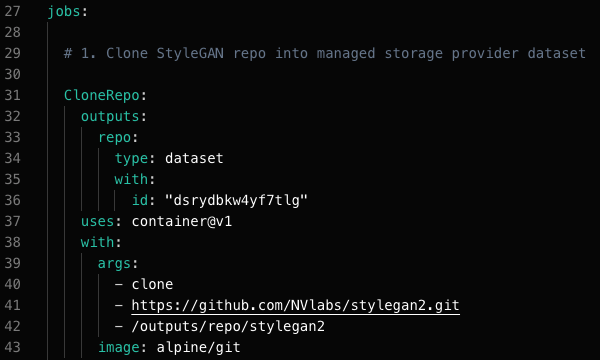 Many jobs within a Workflow spec will not be complex enough to require a script to be imported, but will need several commands. The YAML syntax |- (pipe, dash) sequence allows this to be laid out such that they don't all have to be on one line, and can be written with their arguments.

Inputs directory is not writable​

The inputs to a job are in the /inputs directory, and this directory is not writeable. So to change the contents of this directory it needs to be copied out of /inputs. For example, the StyleGAN2 onboarding Workflow job to generate images contains the commands

Directory paths may be unexpected​

A wrong directory path will cause the Workflow to fail with No such file or directory, or some related consequence, so it is important to be pointing to the right places.

An example of a not-necessarily-intuitive path is when the git-checkout@v1 action is used to mount that repo to a volume, e.g.,

in the with: section.

Datasets must be referred to by their names or IDs within the YAML file. The dataset must therefore be created outside of the YAML file currently [1]. This can be done in the GUI under the Data tab by clicking Add:

Alternatively the dataset can be created using the CLI command:

[1] Unless you are using one of our tutorials that point to the pre-existing demo-dataset, which are a special case

Some GitHub action syntax is not supported​

Gradient Workflows overlap with GitHub Actions, but are not a duplicate of them. We do some things it doesn't do, such as parallel processing, but not all of its keywords are supported by us, so for example, using name: will fail.

YAML is flexible with its syntax in some ways, for example comments can be placed somewhat freely. But some arrangements don't work and will cause a syntax error, often manifesting as some other error likeFailed to fetch data. If desired, you can check that their YAML is valid in a syntactical sense by using one of several YAML checkers online, for example https://yamllint.com , before expending compute resources on running a job.

Supplying commands in YAML can sometimes conflict with what it deems to be special characters, for example this command to download a large file using curl:

will fail with Failed to fetch data: "spec.jobs.TestCommands.with.args[2]" must be a stringbecause the dash is misread. (curl -C - -o means resume downloading a file after an interrupted network connection.) In these cases, enclosing the character in quotes can help, and this form succeeds:

In this case one could also use the |- script syntax as detailed above.

Often when constructing a Workflow you may want to sanity check what is being done, e.g., what files are where. But this can hit YAML syntax too: ls -a will work, but ls -al will fail with TypeError: Object of type bytes is not JSON serializable. As with special characters, a solution is to use the script formulation, so not

and the same under the script@v1 Gradient Action.

Creating and referring to a dataset in the same Workflow​

An example of information implicit in the Workflow that might not match intuition is that there is a difference between referring to a dataset under inputs: type: dataset, and the dot syntax. So if you populate the dataset dstoyg0pdyysyxj for the first time in the current Workflow (not including the GUI creation step above to get the ID), and then try to refer to it with

the run will fail because it is expecting an input from outside the Workflow, which in this case does not exist. However, using the dot syntax

does work, because now it means the instance of cat images created by the earlier job that contained

does exist, assuming the job succeeded. The dots correspond to indentation in this context.

So if you run one Workflow and output to a dataset ID:

then run another Workflow and output an additional file to the same dataset ID, it won't update the earlier dataset version to add the new file alongside the first one. Instead a new dataset version is created, with a new datasetId:version, that intentionally does not include the previous file. This behavior is so that everything is versioned and immutable, which is desirable in a production setting. However this does require you to have a good understanding of when new dataset versions are created implicitly.

Test whether a Python import will work​

To see if a Python module is present on the container you are using without having to run a Python script, run, e.g.,

YAML allows comments in scripts under the script@v1 Gradient Action, but the syntax is strict. This form will fail with a parser error: 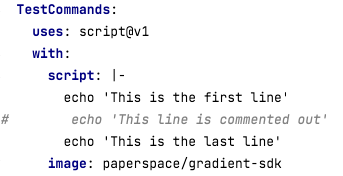 However, placing the comment symbol next to the line succeeds: 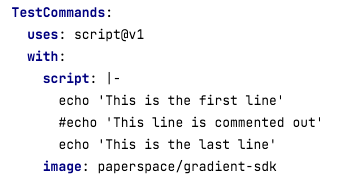 with the expected output of two echoed lines.

This is useful for the common situation of wanting to run a script with commented out lines.