Welcome to Gradient Notebooks! In this tutorial we'll cover everything you need to know to start using notebooks backed by powerful free and paid GPU instances.

Gradient Notebooks is a web-based Jupyter IDE with high-powered GPUs. During this tutorial, we will learn to create and run new Gradient Notebooks by using a pre-built runtime from Paperspace and by bringing our own files and container with advanced options.

If you have experience running Jupyter Notebooks or JupyterLab on other managed cloud services (or on your local machine), you will find that Gradient Notebooks combines the functionality of Jupyter with an additional set of powerful features:

As a result, Gradient Notebooks is one of the most popular managed notebook services available today and is in use by hundreds of thousands of developers around the world.

Why start with Gradient Notebooks?​

Yet notebooks are not for everybody. It's common for a data scientist and a machine learning engineer to have divergent views on the usefulness of a notebook. That's perfectly OK.

Gradient Notebooks is designed to be the simplest entry point into Gradient but it's not the only one. If you're more interested in MLOps capabilities enabled by Gradient Workflows or Gradient Deployments, we invite you to skip ahead to those tutorials.

Meanwhile, if you don't know where to start -- start with Gradient Notebooks. There's no faster way to begin building a powerful ML application than within the friendly confines of a GPU-backed notebook. We'll aim to demonstrate that fact to you right here in this tutorial.

In the first part of this tutorial, we will create a Gradient Notebook to run the latest version of the popular Practical Deep Learning for Coders course from Fast.ai.

To start, we'll need to create a Gradient Project if we haven't done so already. For the sake of this tutorial we've named our project Fast.ai: Practical Deep Learning for Coders. Later on we'll change the name of our project when we add a second notebook.

While in our new project, let's tab over to the Notebooks tab and select the button that says Create. 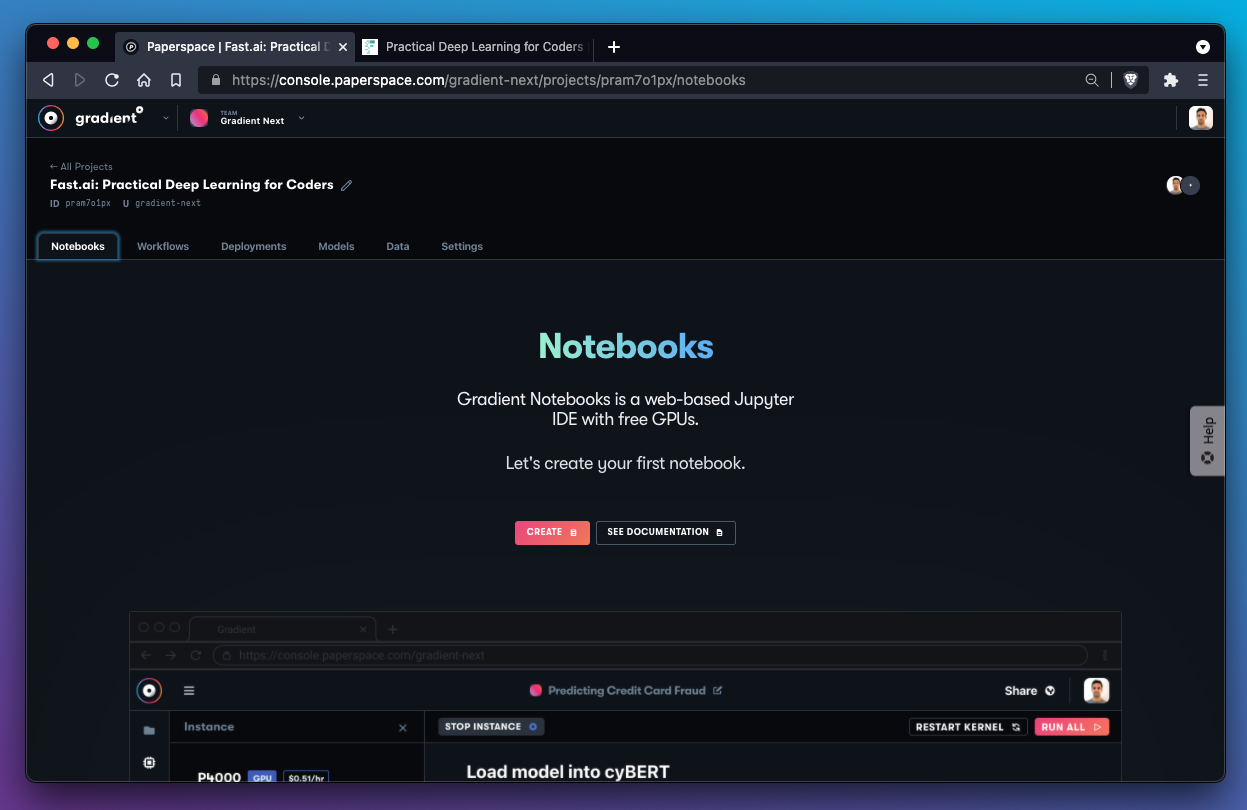 Each time we create a notebook, we'll be prompted to configure a few options. In the first part of this tutorial, we'll select a runtime and a machine. Later on we'll get more advanced during this phase but for now we're going to use a prebuilt runtime that Gradient provides directly in the console.

We'll be selecting the Paperspace + Fast.ai runtime to start. We'll explain what exactly this means in the second part of the tutorial.

For now, we just need to understand that we are instructing Gradient to copy the contents of a special fast.ai repository (which contain the fast.ai exercise files) over to our new notebook and to run those files on a compute instance pre-installed with compatible dependencies.

Selecting the machine and launching the new notebook​

We will now select the machine on which we would like to run the notebook. We have a number of options to run our first notebook, including Free-CPU and Free-GPU instances. In this tutorial we'll be using the Free-GPU instance as much as possible -- however if you have already upgraded your Gradient subscription and would like to use more advanced instances like Free-P5000 or Free-RTX4000 (or even a paid instance like V100) please go ahead! 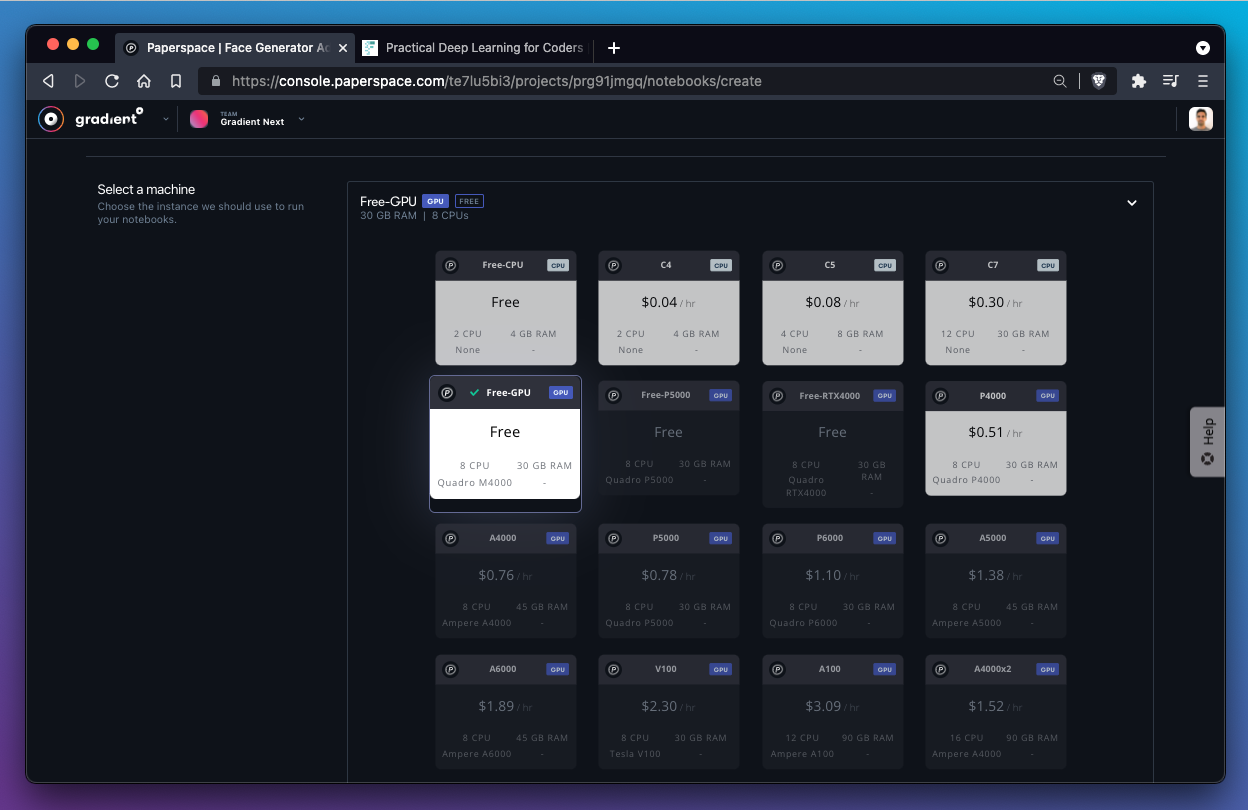 For now we'll select the Free-GPU machine because it is available and we don't need a high-powered GPU here. Let's then go ahead and start our notebook.

After we create the notebook, we should see the Gradient Notebooks IDE. It can take a minute for the notebook to load, so keep an eye on the status bar.

Once the notebook is in the Running state we'll see something like this: 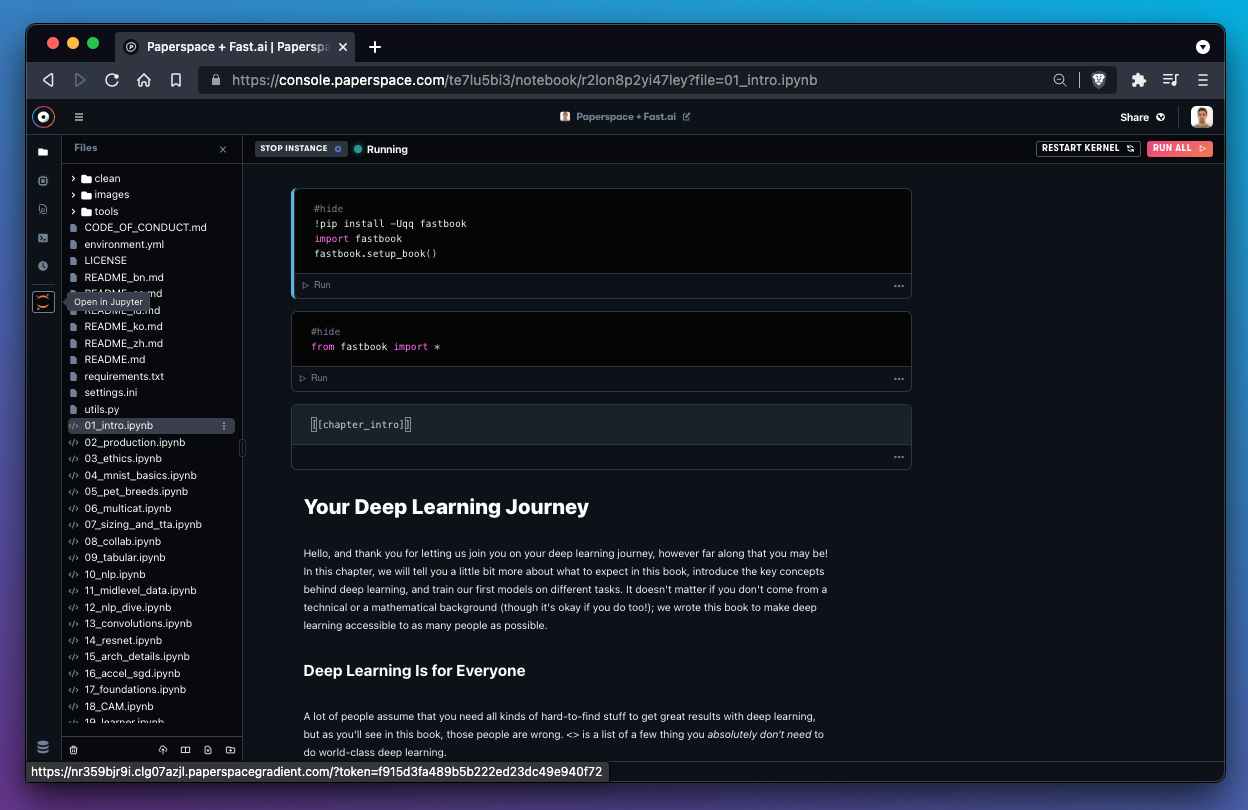 We are officially up and running! Our notebook can now run and execute commands.

As we start to run commands, let's keep an eye on the the bottom bar of the IDE which provides some useful information and metrics. Whenever we want to know if our instance is "doing something" we can look to the bottom bar to see what's going on with our machine.

We will now begin to run cells from the file called 01_intro.ipynb. We should see the cell executing like so:

We were able to run our first cell, but perhaps we want to have our !pip install statements in their own cell? That's easy! First we'll cut the !pip install command from the existing cell, then we'll use the + button, we'll select Insert Code, and then we'll paste the pip command into the newly created cell.

You may have also noticed that you can select Insert Markdown, which comes in handy when you want to add an explanatory or reference block of text to your ipynb file.

We should note that Gradient Notebooks supports editing standard code files as well with full autosave capabilities. In this image we are modifying the contents of the requirements.txt file that ships with the fast.ai learning materials: 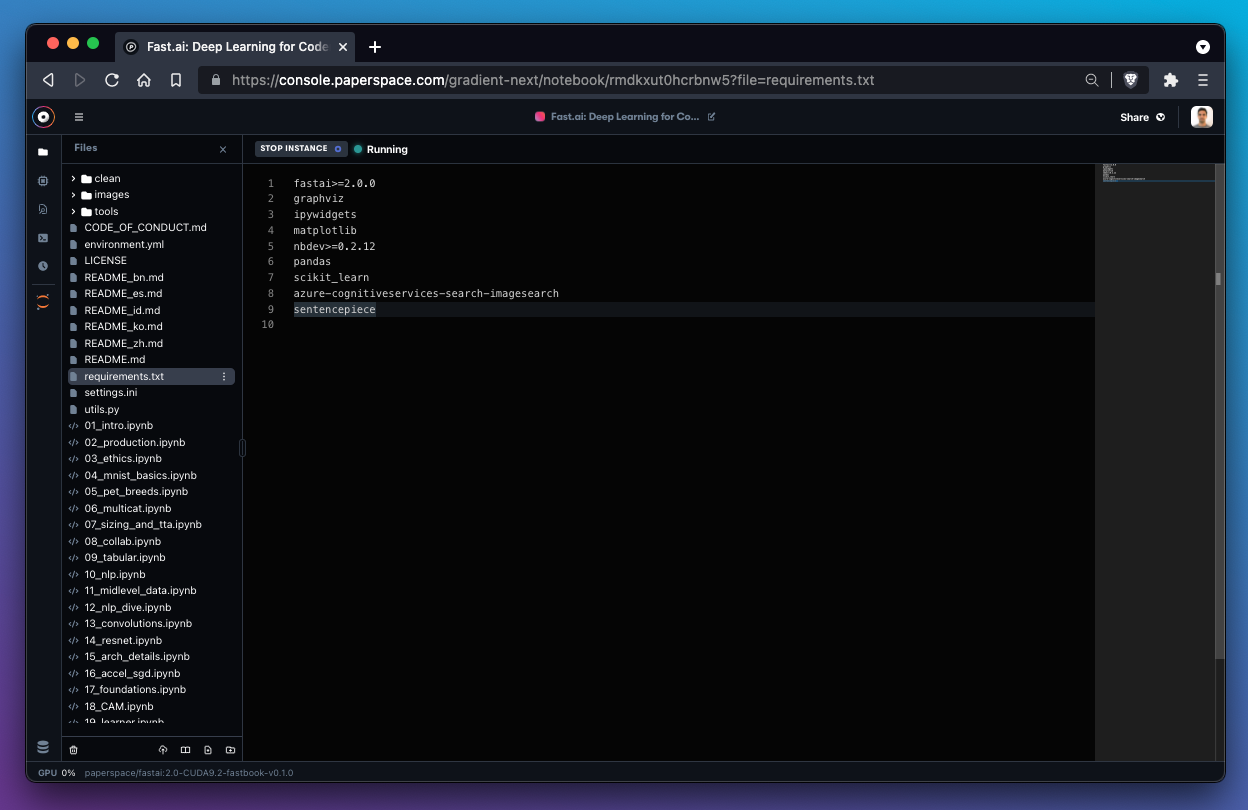 Great! At this point we recommend that you run through as many of the fast.ai files and cells that you care to run. It is a fantastic course written by some of the best ML educators on the planet and we can't recommend it more strongly.

Your notebook will run for up to 6 hours on a free instance. If you'd like to enable infinite runtimes or faster GPU instances, you will need to upgrade your Gradient subscription and recreate the notebook. Meanwhile you can run as many 6-hour sessions on free instances as you like provided Gradient has capacity. The free GPU instances tend to be extremely popular so you may need to play around with your timing to secure a free GPU instance during peak usage hours.

When it's time to stop the notebook, we can let the auto-shutdown timer expire or we can also shut down the instance manually via the instance panel in the sidebar (depicted below) or via the Stop Instance button in the top status bar.

Now that we understand how to set up a basic notebook in Gradient, let's try a more advanced notebook configuration. Our goal this time around will be to use CLIP and PixelDraw to generate an imaginative clip-art piece from a string of text that we will input.

Before we start, if we are on the Gradient free tier, we'll need to stop the notebook instance that we launched in the first example so as not to exceed the limit of QTY 1 concurrent running notebooks on the free plan. If we have upgraded our Gradient account, we can ignore this step.

Let's return to the Gradient console and give our project a more descriptive name since we'll be adding a second notebook to it:

Next let's go ahead and select Create to again bring up the Create a notebook screen:

As the animation above suggests, this time we've called attention to the large number of runtimes that are available to us if we swap over from Recommended to All in the runtime selector. Gradient frequently adds support for new runtimes. The console is therefore a great place to come and learn about new libraries and technologies.

We're taking a look at all these runtimes now because we need to understand what a runtime actually is before we can create and launch our own custom runtime. 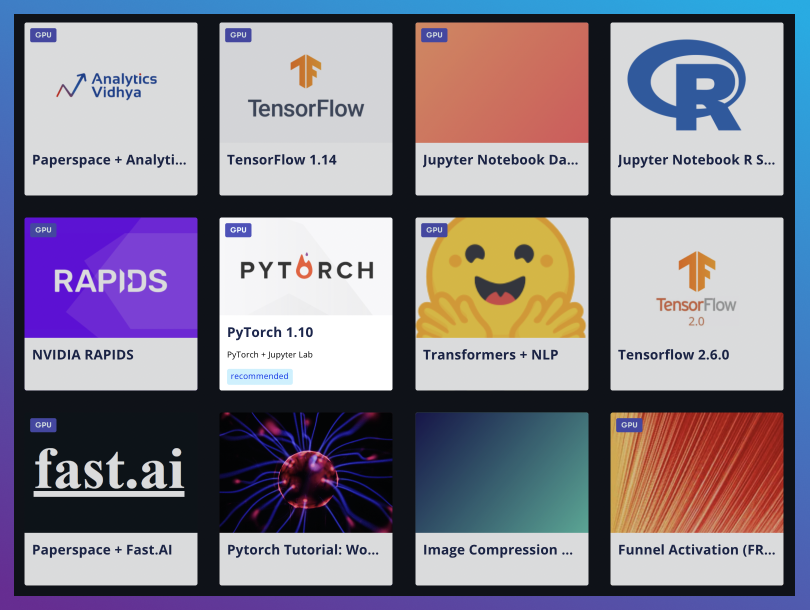 What is a runtime?​ 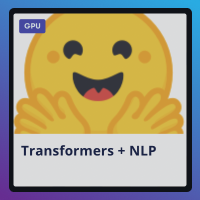 Now let's scroll down to the Advanced Options slider at the bottom of screen and toggle it on. We will see these fields available in the advanced options:

Thus a runtime is simply a combination of Workspace URL and Container Name that results in some files from a repo running against a container image. Pretty simple!

Now let's go ahead and create a notebook with a custom runtime.

What we're trying to accomplish in this notebook​

For this notebook we'll be using an implementation of CLIP from OpenAI and PixelDraw from the PixRay project which allows us to create synthetic artwork from a text prompt that we ourselves input.

In this demo implementation we'll use a text prompt from one of our favorite books (and now a major Hollywood film) and we'll see what the image generator can come up with in response.

First we need to build our notebook. But instead of using a prebuilt runtime tile, we're going to ignore the tiles and go right for the instance type. Let's select the highest power GPU instance that we have available.

Next, we're going to toggle the Advanced options and enter the following parameters:

In this case we are using a workspace that contains a number of files related to this generative art project and we're using a container that has a number of libraries pre-installed to make our job as easy as possible.

Many advanced Gradient Notebooks users will bring their own repositories and containers into notebooks. We'll take a look at what this means after we get this second notebook up and running.

For now, our advanced options should look like this:

Once we're satisfied with the parameters, let's go ahead and start the notebook! Once the notebook is initialized, it will look something like this: 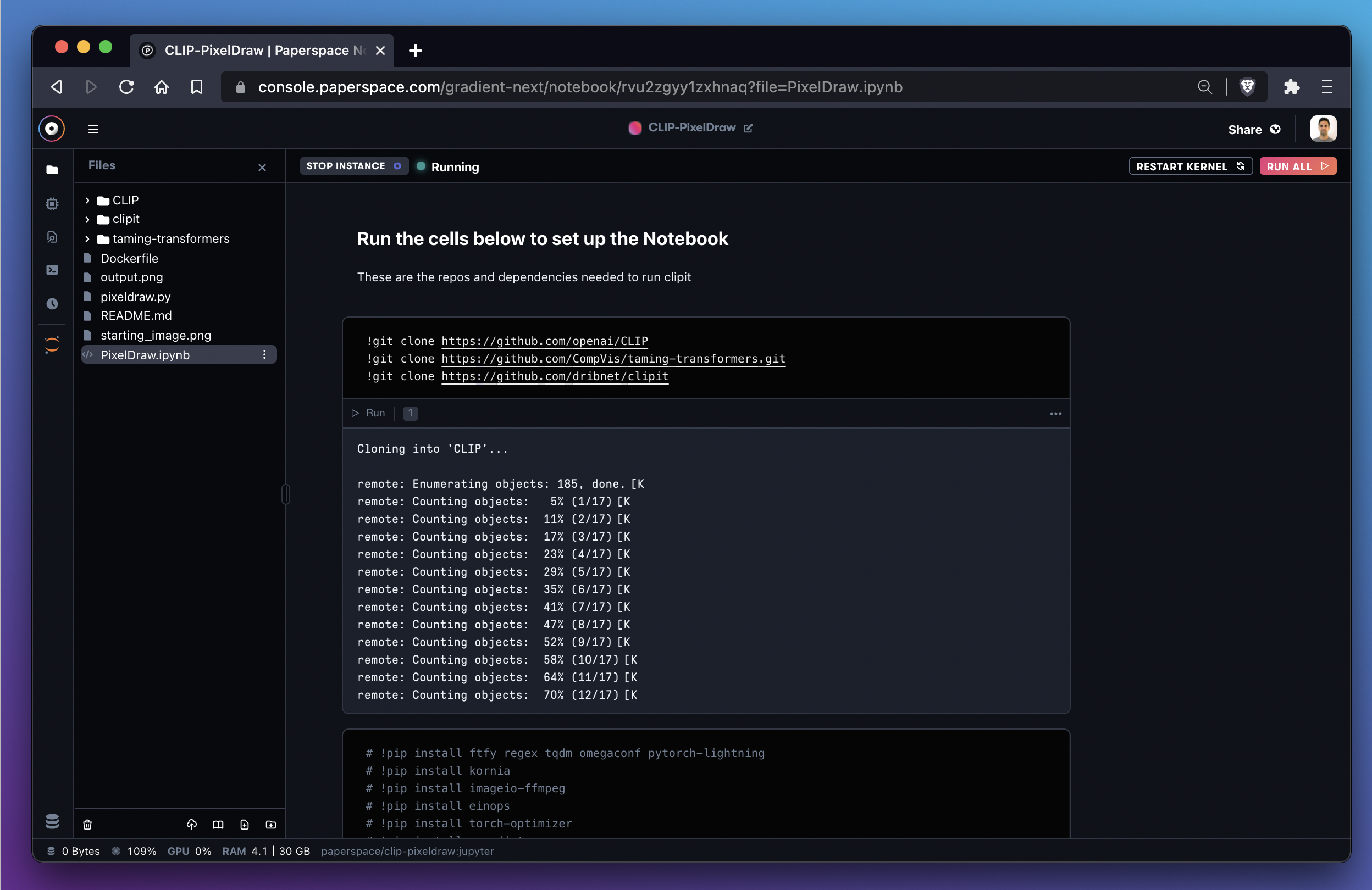 Let's go ahead and run the trio of !git clone commands at the top of the notebook at this time:

The next thing we're going to do is look at the prompt we're using in the pixeldraw.py file. Open it using the file navigator on the left, and go to line 15. By default that prompt is set to the following:

We're going to go ahead and change that. We can change the sentence to anything we like. In the animation below, we'll change the prompt to something that reminds us the sand-covered planet from Dune:

Next, we'll head back over to the .ipynb file and we'll run the cell that contains the following:

This is going to run the code that we just modified in pixeldraw.py.

Depending on what GPU instance you are using, this can take anywhere from 8 minutes - 20 minutes. So be careful! You may be waiting for a while.

After all that waiting, we are able to generate a surprisingly complex scene with some sophisticated imagery: 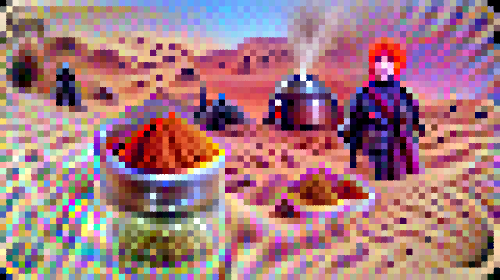 As we can see CLIP was able to interpret a desert setting, an ominous building, a mysterious person, and the object of the person's gaze -- some kind of container with something colorful inside of it and/or on top of it.

In this tutorial, we first created a basic Gradient Notebook from a recommended runtime tile in the console. This first notebook, which contained the course materials from fast.ai, helped us see how easy it is to get up and running on a powerful (and free) GPU instance in Gradient Notebooks.

Next, we created a second notebook -- this time by pulling a custom workspace from a GitHub repository and loading an image pre-loaded with dependencies from Docker Hub. This second notebook allowed us to create generative art with a simple text prompt. It also demonstrated how easy it is to bring external code and containers into Gradient Notebooks.

To take this tutorial further, we recommend that you specify a repository to clone or a container to pull on your own. For example, let's say we were browsing Papers with Code and we stumbled upon a really cool new implementation of CLIP that uses a different artistic technique to generate artwork. To try it out we could create a new notebook with Workspace URL in Advanced options set to:

This would pull the target files into an instance running the default Gradient container.

One common pathway for advanced users is to start with something simple like pulling a repo of interest and to build complexity up over time.

If you need inspiration, the Paperspace blog is filled with novel implementations that often include code and demo notebooks. We've also included a list of additional references below.

If you have any questions, you can reach us any time at hello@paperspace.com or @hellopaperspace.